VIDEOS FOR YOUR EVENTS 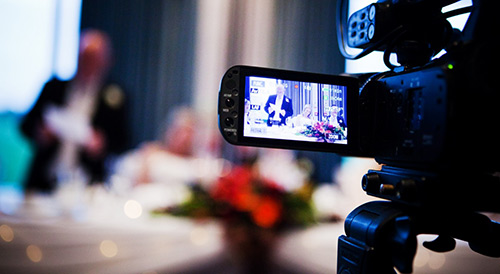 A wedding album has two main goals: the first one is to narrate the event to those who have missed it, the second, is to remind those who attended the wedding of all it’s fabulous moments. Doubtless, these cherished memories will forever leave a mark in our hearts. Not only that, but they will also remain imprinted on “film”.
Wedding Photography is, without a doubt, an art. An art that requires technical and artistic skills. These skills cannot be improvised. Above all else, the key for it being successful, are a professional’s talent and experience. This is something on which you cannot compromise.

A reportage – not a simple video
IThe paradigm shift in the world of wedding shooting is significantly symbolised by the term “reportage”. Nowadays, this term is used as a replacement of “video”, a term that identifies a “style of communication”, more than representing a simple product. With each passing day, it is becoming harder and harder to have a satisfying feeling. After all, on such an important day, where shots are put together in a bulk, it is normal to pretend and expect a professional’s hand. The professional’s talent needs to tell the story, primarily by emphasising through various narrative techniques (and not by simply taking pictures) what happened on that fateful day. Therefore, it is a matter of properly combining technical skills with storytelling, talent, sensibility, and capabilities that have been distilled only in professionals worthy of the name.

The most significant moments
Not every single moment of a wedding is filled with a deep meaning. As a result, not all of them are worthy of entering the narrative structure of the wedding. It is required to have the technical and artistic sensibility of a photographer that is an expert with wedding videos. Otherwise, there would be nobody able to properly assemble the pieces of this collage, united in a seamless narrative structure, and able to convey feelings, experiences and emotions of the day of the union of two individuals. Even when it comes to photos, it is now considered unacceptable to just take a few pictures in a hurry, in a location that is surely interesting, but without any kind of integration in the context of shots and photos. Once again, in order to make a difference, a professional photographer requires two things: preparation and sensibility. Even if it’s customary to indulge the spouses wishes, he must carefully choose his lighting, the angles and the representations that will become part of the photographic album context.

…with the protagonists management
The choice of location is critical, because the day of our marriage is not comprised of a very long photo shoot, and the resulting album will only be an aspect of many great memories. A professional is perfectly able to organise this event without monopolising the presence of the couple, after all, they are celebrating the most important day of their lives.

THE ART OF PHOTOGRAPHY

Over the last couple of years, wedding videos have gone through an encouraging evolution. In addition to that, the mere reportage is also being accompanied to history, in a narrative perspective that closely resembles that of reality shows and television documentaries.
You start approaching, so to speak, a lot of videoclip language, in a video narrative that does not only wish to bring back what has been experienced, but wants to give it rhythm and epic history through the use of appropriate editing techniques, suitable music, and particular shootings.

This recent development was so pivotal, that it shifted almost all of the new married couples towards the new narratives of weddings, to have a memory of a finished video product, and not just to have a mere succession of events.

The videomaker: A professional who is not an instrument of the camera anymore, but a person who knows the linguistics and narratives most suited for videoclips, television storytelling and reality, and is capable of taking the event and then edit it to imprint it with a suitable narrative implant. A narration, that instead of only describing how events went down, at the same time, is also able to transmit the same intense emotions of what happened before, during, and after the ceremony.
This is a crucial figure, mainly due to the fact that a wedding is not a movie set, where one is allowed to interrupt the action, and if the shots appear to be mediocre, he has the opportunity to take it back where he left off. However, when filming live events, one is forced to record events as they are, with all the unforeseen and inconvenient obstacles that happen during live recording.
To handle this situation, you need a professional. Someone who by combining talent, experience and techniques, can provide the couple and their families a video that will not only be the memory of a beautiful day, but also something enjoyable to look at.

Before the ceremony, during the ceremony
One of the growing trends of recent years is to accompany extra sequences to the filming of the ceremony itself. Moreover, pivotal moments or days that precede the ceremony, and that try to explain what are the preparations and the emotions of the protagonists. Mostly, to fully reveal what the general atmosphere of waiting for such an important day looks like. By properly assembling sequences, it manages to create a romantic result, which is both exciting and lively, which is light years away from those videos that once they are filmed, nobody will want to see ever again.

The songs: The soundtrack of a love story
Another critical decision is to choose the appropriate songs. The choice of songs that will accompany the filming is of extremely fundamental importance to the narrative structure of the video, which is dedicated to the celebration of the marriage. A proper soundtrack is what separates a mediocre video from a cherished memory of our wedding. A memory, that is not only appealing to the protagonists who have gone through that day, but, that is also aesthetically and artistically valid. Ultimately, by always following the intentions and the particular tastes of the couple, it will be up to the video maker to put the pair in a position to choose what is most appropriate for the video.